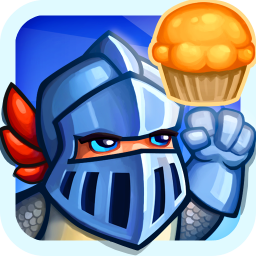 Fertilize the forest with the unicorn, cover the sky with black holes, flood the world with candy, but just get the muffins back!

Muffin Knight is an action-packed platformer with stunning visuals and a myriad of fairytale characters, each with their own unique abilities, which gain strength as you advance.

This is the story of a little boy, on his journey to return the old fairy’s magical muffins. A strange curse was set on him: with each muffin he touches, he turns into a different creature. The old fairy promises to turn him back into a boy when he gets all the muffins back.

★ CUTE AND CUDDLY ★
Play as 15 different characters, each with their unique special attacks
Make your way through swathes of dragons, turtles, werewolves, ghosts, bats, goblins and other cute fluffy creatures
★ DEPTH OF GAMEPLAY ★
Level up, unlock new characters and upgrade their abilities
6 perks will bring you extra abilities during your quests for the muffins
★ EPIC BOSS BATTLES ★
In the end, you’ll have to prove your skills by defeating the evil lava king
★ CROSS-PLATFORM MULTIPLAYER ★
Challenge a friend playing on an iPhone, iPod touch, iPad or Android device, in intense head-to-head multiplayer matches
➠➠➠➠➠➠➠➠➠➠➠➠➠➠➠➠➠➠➠➠➠➠➠➠➠
This game is optimized for use on all Android phones and tablets, including support for the NVIDIA Tegra devices and the Xperia PLAY.