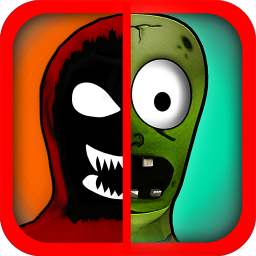 Zombie vs Death: The Run Game

Merge yourself into this fantastic zombie adventure. Rock is a big guy that has died a while ago but never managed to accept his death. He misses his old life as a human and most of all he misses his favorite meal..... huge tasty burgers. Out of this reason he takes the first opportunity he gets to escape from the dead world. Now he is back in the living world where he does not belong anymore trying to eat as much burger as he can in the shortest time possible.
Your target is to try to fight the angry death as long as possible and keep Rock in the world of the living even if just a little bit longer. Become part of this war of survival and defend Rock by hitting the death with a drift (slip), a kick or a double fly kick. But pay attention it will not be an easy task as your path has been littered with traps and obstacles such as red TNT boxes that could blast him away, large infernal holes (hell gates) where he could fall, damaged cars that obstruct the road and many more. Because he knows that his absence must have been noticed in the underworld and there is no way the death is going to let somebody escape who has been already taken.
***Features:***
- Easy touch and tilt control
- Original 3D-run function combines jumping, turning, and sliding.
- Colorful graphics and smooth animations
- One of the coolest zombie apps to play with!
- The never-ending mega game
- Time change like: Night, day, sun rise, sun set and moon rise / set
- Special abilities:
> Thunderbolt: Makes you run much faster (at a nearly uncontrollable speed)
> Chronometer: Resets your speed to normal (slows you down)
> Green flare: Makes you invincible for 10 seconds (The only thing you have to remember is to turn at every corner) Advise: Catch the chronometer during your rush through the city to slow down the speed and increase the possibility of getting farther. Warning: Avoid the thunderbolt / lightning power up, as it will give you a turbo boost that makes you incredibly fast, but you will probably quickly lose control of the zombie. The only way to stop the high speed is to take a chronometer. Race through the city and let the Zombie have his last hearty meal before he is going to rest in peace.