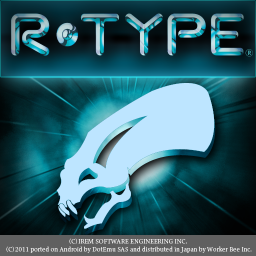 Shock masterpiece which is not faded "R", revived the Android version!
This is the Android version legendary arcade game in the 1980s of "R-TYPE".
It set a milestone of side-scrolling shooting and left his name in history.
I am taking over the following features from the arcade version.
[!features!]
· A unique view of the world unparalleled and biological weapons, such as nightmare and huge battleship that fill the screen.
-With a laser of three types characteristic, weapons independent of the aircraft called "Force" is, can be separated / combined with the aircraft.
· I shoot with a reservoir of energy shot "wave motion gun", it has a penetrating effect, you can also defeat any enemy!
As a specification of Android handsets,
-Difficulty of two can be selected.
-New operation system in "touch mode", the operation of the aircraft can be intuitive.
To fight against invaders Bide of the universe, the way victory manipulating the last hope of mankind "R-9A ARROW HEAD!"