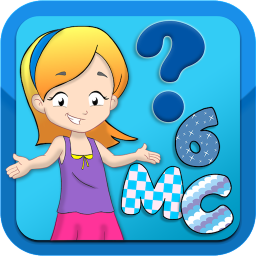 Discover the 26 letters with Plume. Based on a proven method, the child learns and recognizes different letters to learn the alphabet ... He learns first uppercase, then the script letters and cursive letters.
An original Card Matching Game is also available : associate a sound and a letter, a cursive to a script ...
And for the smaller one, discover the ABC book inside ! And because every one need a break while learning, let your child play with the Animal Stickers Game included !
Educational areas covered in this application are:
* Learn uppercase
* Learn script letters
* Learn cursive
* Follow simple oral instructions

At each level, audible and visual rewards keep intact the interest of the child.
The application is divided into three parts which can accompany the child between 18 months and 4 years for the first part, uppercase, 3 to 5 years for the second, based on learning letters scripts and 3rd party deals in cursive, between 5 and 6 years.
The 6 games are:
* I learn uppercase
* I learn the script letters
* I learn cursive
* Original Card Matching Games - associate a sound to a letter, a cursive with a script ...
* ABC Book - Play with the letters
* Animal Sticker Game
These games can accompany the child regardless of their level of learning. It covers different points of the kindergarten program, such as:
* Listening,
* Knowledge of capital letters and cursive script,
* Monitoring of orders
********************
Audio: English or French
Included:
Upper case, script and cursive
Card Matching Game
ABC Book
Animal Stickers Game
********************
Plume's School - ABC and 123 is part of the learning program Plume's School - for the 2-6 years. Used in conjunction with other applications (Plume's School - animals, Plume's School - letters, Plume's School - shapes and colors), it allows the child to learn by playing a solid foundation for entrance to school and learning to read.
To have more fun, children can also play memory of the senses (visual and audible) in the same collection with the series The memory of Plume.
********************
Ideal for children from 2 to 7 years.