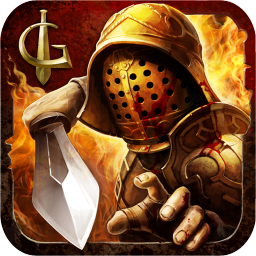 #1 Game in 24 countries!!!
* 4.5 stars rating by players!
The Action is exhilirating in the game that is rank #1 in 24 countries. Based on epic Gladiator movies and games of the past, I,Gladiator brings exciting and fast-paced gameplay to mobile.
Rufus is a Pawn between two warring Roman gods. For Rufus to gain control of his own fate and to get revenge, he has to start at the bottom and fight his way through a series of increasingly difficult tournaments in different locations. You play Rufus and you are his destiny!
You attack from different angles based on easy to use screen gestures and controls. You can also string together combos when you swipe continuously (like in a figure-eight pattern) until you run out of stamina. Swiping down kicks your opponent in the gut, knocking him down if unblocked and giving you a breather. Holding down the shield button can parry incoming attacks, while holding and swiping allows you to dodge anything that can't be blocked.
+ Now Multiplayer
+ 80 ACTION PACKED LEVELS
+ OVER 100 HISTORICALLY ACCURATE WEAPONS AND ARMOR TO UNLOCK
+ 20 ADRENALIN DRIVEN HOURS OF GAMEPLAY
+ MULTIPLAYER! COUNTLESS HOURS OF DYNAMIC ONLINE BATTLES
+ BREATHTAKING COMBOS
+ STUNNING COMICS-LIKE GRAPHICS
+ FULL COMPATIBILITY with iPhone 3gs, 4, 4S, 5, iPod 4-5, iPad 1-4 and mini
Punch them, kick them, hit them, stun them, impale them, dismember them, burn them, destroy them! Be the best gladiator to be cheered for by the Romans and their Gods alike!!!
RESPONSIVE AND INTUITIVE TOUCH CONTROLS
Attack, dodge, block, and use combo moves - all with the simple swipe of a finger.
SIMPLE NAVIGATION
Easy to use, tap-to-move controls enable players to effortlessly navigate and explore while searching for collectable items such as treasure, swords, shields, armor and other magical rewards.
GORGEOUS INTERACTIVE ENVIRONMENTS
Use fire pits and other objects to win… or lose.
UNIVERSAL APP
Play across all supported devices - iPhone 4, iPhone 4S, iPhone 5, iPhone 5C, iPhone 5S, iPad 2, iPad 3, iPad 4, iPad Mini, or iPod Touch 5 and Android.
Some Reviews:
**Editor Picked by Best10App.com**
**"Most epic iPhone game of all time" - NewsWatchTV**
**"This is one of the coolest swipe combat games" - appolicious.com**
**"I, Gladiator is an unique experience of combat game. Really it is intelligent, evocative, and strangely effective game" - igamesview.com**
**"I, Gladiator is worth suiting up for" - appaddict.net**
Find more about the game on the game official site: http://igladiatorgame.com/
Follow us on Twitter at https://twitter.com/I__Gladiator or like us on Facebook at https://www.facebook.com/IGladiatorGame
See our official game trailer and movies at
https://www.youtube.com/user/IGladiatorGame/videos