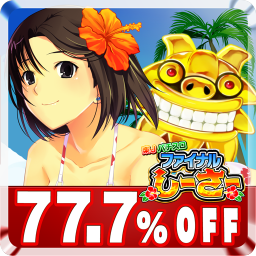 ・Basic information
"Raku J Pachislot Final Shisa " is
It is a smart phone version Pachislot simulator app original Dorasu was planning and development .
Pachi internal lottery , as well as
All leading to the liquid crystal production music , voice , BGM, SE, and BB in has become the original specification .
Game characteristics that it is easy to understand for beginners ,
Character friendly , by pop sound , is sure to be able to enjoy for everyone .
・Game of
・4 Unit like ! ! I increase the bonus !
" Bonus" hits a small role and de- number of games released ! Is not a pseudo , and comprehensive Mokuseyo a barrage of pure bonus !
・1G continuous chance bonus now!
7 set of bonus in 1G ream ! Moreover, BB confirmed ! ?
The Yosero Hauling in to play the self !
・chance 128G within ! ?
Renshaw zone 128G! Cancellation rate ... 50% or more ! ?
・Aim for the zone to visit in moderation !
The hot zone in the number of games released ! Fake is also prone zone ! ?
Regardless elucidate the zone in themselves !
・The Ore grabs in watermelon and cherry !
It is equipped with a small role release ! To the high probability state in watermelon , released by Cherry !
Also hit by watermelon ... ! ?
・Original song "Final Shisa "
It is possible to listen to the BIG during the original song of working as a vocal band " Melstorm " , Nagae Rina sing !