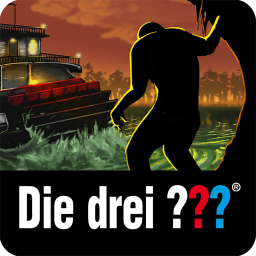 - German language only –
The Three Investigators are ready to deal with a new case! Jupiter, Peter and Bob embark on an old paddle-steamer to find themselves right in the middle of an exciting mystery.
Actually, the three master detectives would like to get some relaxation; however, the next case is already waiting for them. The paddle-steamer is being haunted by a mysterious thief! Some of the people aboard seem to have a finger in every pie: taciturn Benjamin Biggs, the ship’s cook; Monty Star, a notorious bon-vivant; or self-styled party queen Cyntia Cicero… The series of thefts turns out to be a very tricky case, as the number of suspicious persons keeps growing – and finally, even the three detectives themselves are suspected. Help the Three Investigators solve this mystery – catch the perpetrator!
*****
Questions or suggestions for improvements:
Mail to android@usm.de
We are looking forward to your feedback!
For more information on news and updates: www.usmgames.com
or visit us on www.facebook.com/UnitedSoftMedia and twitter.com/USM_News
*****