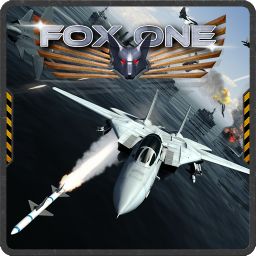 *Best value for money* - Pay once, and have access to the whole game, all planes, weapons and stages. **No in app purchases.** ***The player has to progress in the game to unlock all planes and stages, without any additional payment or use hidden cheat codes to unlock all planes ***
FoxOne is an action flight simulator where the entire world is your battlefield. Take part in a battle against terrorist powers, flying modern combat aircraft for a secret mercenary squadron. Get paid for your kills, to unlock and buy increasingly advanced aircraft, and rank yourself mission after mission against fierce enemies.
Features:
- 10 different aircraft: F-5E Tiger, MiG-21Bis, F-4 Phantom, Jaguar GR3, MiG-29 Fulcrum, F-2A Viper Zero, F-14 Tomcat, Rafale, J-20 and the F-22 Raptor.
- Incredible small file size (<40MB) with HD graphics quality.
- Unparalleled sense of speed: feel the thrill of blasting through the skies in 10 different supersonic jets, based on real aircraft models, each one having its place and use in the game.
- Easy controls: unlike other action flight sims, FoxOne has intuitive and very responsive controls, so you can focus in the battle instead of trying to stay airborne.
- Range of different weapons to equip your jet: from the built-in cannons to guided air-to-air and air-to-ground missiles, bombs and unguided rockets.
- Fly through 15 stages, with challenging and varied missions in different places of the world, in a non-linear way.
- Destroy reactors and bases hidden deep inside canyons.
- Protect allied aircraft such as the US Air Force One, or defend entire cities from enemy bombers.
- Gritty and visceral: no cartoony visuals and silly characters, this is the real deal: flying several types of fighter jets as a mercenary fighter pilot is a serious business, and FoxOne's atmosphere is tense and chilling. Fly to live, kill or be killed.