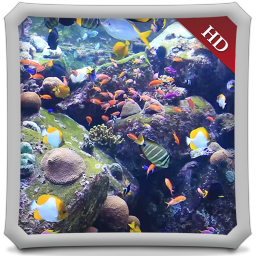 Ever think about the wonderful creatures forming a cluster in their best appearance? That scenario would be really filled with the awesomeness of its height. Pretty little fishes, looking like, making a colony deep down the sea. This view has been captured form the nature and is being presented to you in this app to let you exposed towards the shine of jubilation, which will once pierce through your senses, will enlighten you up, taking away your worries and soothing your mind with an intense peacefulness.
This app is not going to compromise merely on a video. Instead, it has endowed with other different features also. The appearance of the app is beautified with five different frames and five different screen effects; the auditory sense is pleased by five calm default music along with the custom music. The sleepy effects will be assisted by sleep timer, which will let you to set the turnoff time of the app. With no further delay, download this spectacular app for being laden with the furs of joyousness.