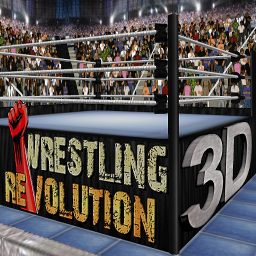 The Wrestling Revolution rumbles into a whole other dimension, where it now reigns as the biggest 3D sim on mobiles - featuring an epic universe of 300 characters and up to 20 of them in the ring at once. So many, in fact, that it also requires gaming's first War Games style DOUBLE ring to contain the action!
The free demo features 8 cards of preset matches to play through, along with an interactive tutorial starring a trainee of your own creation. The full career experience may become available to buy once an audience can be established on Amazon.
BASIC CONTROLS
The game features an interactive tutorial that you are advised to play through, but the basic controls are as follows:
CURSORS = Movement (double-tap to dash)
A = Attack (with a direction to aim high, without to aim low)
G = Grapple
R = Run
P = Pick-Up / Drop (with a direction to throw)
T = Taunt / Pin / Referee duties
EYE = Change focus / Turn opponent around
HEALTH METER = Switch character
CLOCK = Pause / Change camera angle
EDITOR
- Click either side of an option box to change its value.
- When changing costumes, you will notice that changes are automatically inherited top-down and from right to left. If you want to fine tune, you can then move onto the other side.
- It may be necessary to access a body part again before you can change its colour.
- Changes to the character's "Build" will need to be reloaded with the "Update" button before they can be appreciated.
- Hold over the character model to turn them around to see from all angles.
PERFORMANCE
Although every effort has been made to keep performance as high as possible, some devices may benefit from a visit to the Options menu to fine tune the display:
- The number of characters is perhaps the biggest factor so consider turning off referees and setting a limit on the match size.
- If you don't want to sacrifice numbers, you can sacrifice polygons instead and opt for "Basic" character models (no fingers).
- The ropes are surprisingly demanding and you may squeeze in an extra character if you make them "Static".
- Turning off shadows and reducing crowd sprites may also help.