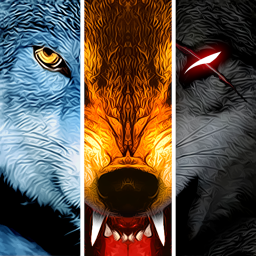 [!game!]
A cruel and gruesome war among three wolf species begins. A real network survival game to survive not only from animals hunting for food but also from battles against other wolf species for your own species’ survival. “Wolf Online” is the best online animal game followed by the “Life of Wolf” series, reaching 5 million downloads throughout the world. We are now waiting for you, the best wolf warrior, to join the fight.
[!game!]
The wolves’ hunting for survival and prosperity has started. You can select one wolf from Mountain Wolf, Snow Wolf, and Wild Wolf and participate in hunting as a member of one of these packs. To survive in a dangerous, rough hunting environment, you have to endlessly hunt animals and master your own skills. Also, you can only grow faster if you win in the battles among the wolf species and get trust from your own wolf pack. In the hunting ground that is distinguished by 6 characters, there are plant-eating animals such as rabbits, deer, and giraffes, but there are also many other scary beasts and wild animals such as tigers, lions, and rhinoceros that can threaten and attack you. When you meet monsters from legends, you should ask for help from your wolf colleagues because they will make your strong teeth and sharp claws useless. Your colleagues will come to you right after hearing your cry. If you are ready and all set, let’s leave to the hunting ground of the wolves.
[!characteristics!]
Mountain Wolf : Living in Stone Mountain, rough and dangerous mountainous area, the Mountain Wolf has the most balanced abilities among the three species.
Snow Wolf : The Snow Wolf, living in Snowstorm that is covered in cold ice and snow, is the species with the fastest speed and the best agility when hunting preys.
Wild Wolf: The Wild Wolf, which settled in Wild Land of living and breathing souls of ancient beasts, is notorious for being the most brutal and aggressive out of all three species.