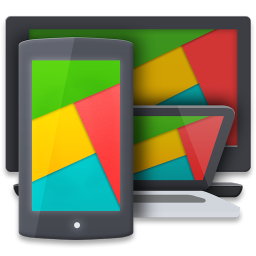 Screen Stream Mirroring is the most powerful app for mirroring and broadcasting your Android screen and audio in real time !
You can share screen "live" just like a dual screen to any device or pc on the same network through media player, web browser, Chromecast, and UPnP / DLNA devices (Smart TV or other compatible devices).
You can make powerful presentation for work, education, or gaming.
You can live broadcast everything to Twitch, Youtube Gaming, Ustream, and any other internet popular streaming servers: perfect to broadcast your favorite games such as Clash of Clans, Minecraft, Game of War, etc...
You can also record it to video files.
This is the full version of Screen Stream Mirroring.
Full version contains no time limit and no ad.
If you want to be sure the application works with your device before buying please try free version
Following features are available:
[!no!] Mirroring, screen sharing with media players and tools such as VLC, XBMC/KODI, OBS (Open Broadcaster Software), and others...
[!mirroring!] Live broadcasting to Twitch, Youtube (Youtube Gaming), Ustream, and others...
[!mirroring!] Mirroring, screen sharing with UPnP / DLNA devices such as Smart TV, Blu Ray players, and others compatible devices
[!google!] Streaming timer and stop when lock screen
[!camera!] Image overlay
[!twitch!] internal audio (ROOTED Android 4.4 and above) and microphone streaming
[!mixed!] Recording
[!compatible!] Many settings to optimize performances
[!any!/]