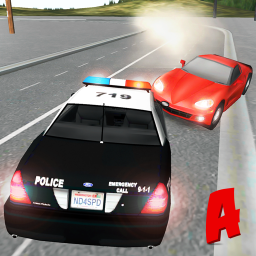 Police Robbers furious racing game is all about high speed street racing chasing down robbers in this crime city environment. If you are a fan of high speed chase, street racing and police driver racing games this is your chance to earn respect on the streets of this crime town. Be the fury of the furious cops chasing down robbers at high speed, racing and smashing cars till they stop, felons on the other hand street racing to survive and escape the furious police.
Robbers blaze through the streets at intense speeds making the police furious as ever, with no rules in play. Slowing down is not an option, the cops street racing to chase down the felons.
The rivalry between police and robbers is reaching a new level in this amazing furious car racing game with amazing car controls making this game easier to play and providing the thrill of street racing at its finest.
Download and enjoy police vs robbers car driving game and enjoy.