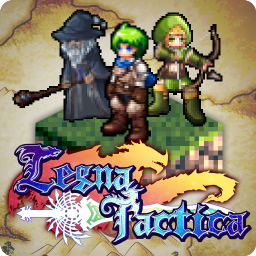 Make use of intricate tactics to work towards peace in a grand Strategy RPG!
[!a!]
Two boys, each with the same dream: to rid the world of war. To make that dream come true, is it better to protect the weak? Or is it better to push on forwards to gain power, even if that means losing something sometimes? In a world of turmoil, the boys’ thoughts and feelings are tossed around just like floating leaves.
Your choices can change the course of the story!
A dramatic story full of ups and downs, set in the warring Kingdom of Legna!
[!tactics!]
- Take care of which way the characters face!
The damage the characters sustain depends on the way they are facing. Think ahead when choosing the direction the characters face while waiting for their next turn!
- Make use of different land heights!
By occupying higher ground, you can gain advantage in battles. Use tactical movements to defeat the enemy!
- Make the best use of range skills!
There are powerful range skills, which can inflict damage on a number of enemies at once. There are even brutal skills which indiscriminately attack enemies and allies alike...
-Choose the characters you develop!
Choose which of the 14 characters you use depending on the stage you’re at, and build up your favorite characters!
[!the!]
One of the most significant elements in the game is the Skill Tree system.
Perhaps you want to build up a character who can act as an impregnable defense?
Or do you want to build up a character able to deliver deadly blows?
Or maybe even a matchless character, with range magic?
The Skill Tree can be reset at any time! Enjoy developing your characters just the way you want!
[!basic!]
Difficulty：Hard Mode added after completing the game
Maximum Level：150
Equipment Slots：Head, Chest, Hands: 2, Ornaments: 2
Characters：14 controllable characters
Replay：Possible
Extra Bosses：Yes
Save Slots：3 (plus 1 in-battle data slot)
*While in-app-purchase content requires additional fees, it is not necessary for finishing the game.
*This app has generally been tested to work on any mobile device released in Japan. We cannot guarantee full support on other devices.