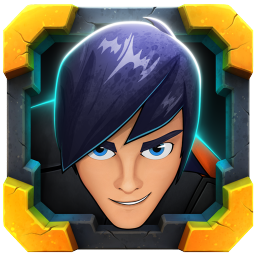 Based on the animated television series Slugterra, take up the mission of Eli Shane to defend the 99 caverns and become the greatest slugslinger!
In this high-tech world beneath your feet, the ammo's alive and only the quick survive. Play as Eli Shane and assemble your team of slugslingers to protect the citizens of Slugterra. Collect an arsenal of little critters called slugs — when you fire them at 100 MPH out of your high-powered blaster, they transform into powerful battle beasts!
With the help of your friends, your slugs, and your cool high-tech gear, defend Slugterra from the clutches of Dr. Blakk, who seeks to control the 99 caverns. The crux of his plan? To ghoul all the slugs with a substance called Dark Water, transforming them into mindless feral weapons! Track down and destroy each of Dr. Blakk's Dark Water stations before he can conquer the 99 caverns!
Simply tap to move and to target enemies. Customize your armour and blaster, equip your favorite slugs and upgrade them for maximum power. The more you play, the more gear and slugs you unlock!