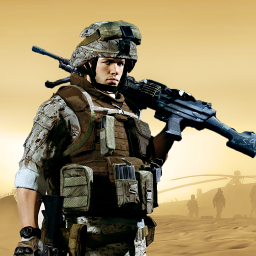 A number of terrorists have attacked the main concert hall full of tourist of your city capital, a football stadium, railway stations, subways, airports and bars with gun and bomb attack causing a number of deaths and civilian casualties in your homeland due to bomb blasts & gunfire by terrorists & siege the area. Some terrorists were with AK-47s, some were with bombs strapped to them, Terrorists have attacked a number of famous places throughout the capital while horrified sound of peoples were coming from scenes in this attack which caused a national disaster, leaving a nation in mourning and the world in shock, so your state government have declared a national state of emergency, tightens its borders and ordered a ruthless response to terrorists to strike their hideouts as terrorists have successfully managed to escape in border area heavily covered with trees like a dense jungle, taking with them few hostages.
Your government homeland security department has decided for an Army Commando operation with SWAT team force to eradicate those criminals entirely and to avoid any kind of threat to homeland in wake of those outrageous attacks by extremists which have spread a terror kind of situation in whole country as those attacks were on innocent peoples and humanity while an outrageous attempt to terrorize innocent civilians.
In this Army Commando combat Mission game you are part of Army Commando SWAT team to kill those terrorists and extremists in order not to occur such carnage again in history of your country as this has created a huge panic and bloodbath in capital city. You must aim high in this war game combat missions and strike at target as you are a pride of nation and shouldn’t show any mercy to terrorists who have killed your loved ones and don’t let shattered proud of your military SWAT units. You must teach a lesson to all merciless terrorists in this assault who have initiated this atrocities and show that your nation is determined and united against these unprecedented terrorist attacks while exhibiting compassion and solidarity with your nation against this act of inhumane killing of civilians.
In this combat operation battle you are equipped with modern Sniper rifles during raids at siege places, with back up support from your military troops so you have to fight like a brave solider as a front line commando in this offensive battlefront raids starting from your base till the death of all criminals and be a hero in this call of Glory and be a ultimate soldier of the nation in this epic battle.