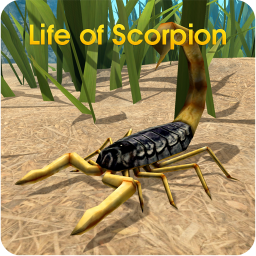 ❊❊❊❊❊ Life of Scorpion ❊❊❊❊❊
Do you love scorpions? The predatory arachnid that dream are made of. Take control of your own scorpion in this beautifully created 3D insect world. Create your arachnid colony, feed the king, find Worker and attack scorpions, and hunt down the insect bosses. The ultimate creepy crawly insect simulator you have been looking for.
***Customize your scorpion***
***Special Magic Attacks Included***
You will enter this insect world as a young scorpion and build your colony. Finding workers will help to establish your colony. When you find all 6, the King will arrive. Once your colony is large enough, the king will arrive. You will also find yourself in head to head battles against Ant colonies, Spiders, Praying Mantis, Wasp, Butterflies, Honey Bees, Beetles, and Dragonflies. Insect hunting has never been more fun.
Top Game Features:
*** Sting Attack Strike
*** Magic Shock and Fireball Attacks
*** Huge 3D Insect World Map
*** Realistic wild insect sound effects and real weather effects
*** Open World Style RPG game
*** Fast paced and action packed animal simulator
*** Part survival and part animal simulator
*** Call your colony members when you are near your enemies
How to play:
Part 1 : Build your Scorpion Colony
--Find 6 Worker
--Find 6 Attack insects
--Feed your King
Part 2 : Locate and Defeat the Bosses
--Bosses include Butterfly, Giant Ants, Dragonfly, Praying Mantis, Ladybug, Bees, Spider, and Wasp.
Part 3 : Defeat the enemy Clans
Part 4 : Find and Defeat the Super Bosses
Be sure to like us out on Facebook : https://www.facebook.com/wildfootgames
Big Thanks to everyone for all the awesome feedback! We are super excited about our most recent insect series of games - aptly named "Insecto". But wow do we have something in store for you coming up soon. Some massive long form animal simulators are currently in the development pipeline. Stay tuned! Be sure to send us an email at wildfootwork1@gmail.com and let us know how we are doing. Thanks again for playing, good luck!!