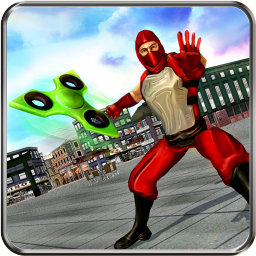 As a Ninja Fighter you have win the battle against the evils!
Stay alive!

Its not a usuall ninja with a sword, he is a super ninja with ultimate fidget spinner powers. Use your martial arts and fighting skills, which include special moves like Super Punch, Superkick, and cool flipping stunts. Combine this with the super and exceptional spinning powers of your fidget spinner! Take down the mafia thugs by aiming and hurling the classic spinner at your enemies.
There is a lot of crimes in the city and people need a true hero as their defender. As a Ninja Fighter you have to win the battle against the evils. Experience the most addictive ninja action game. Survive the most dangerous challenges that come your way. Ruin your enemies’ missions before they even try to shoot you or kill you. This war is between you and your evil rivals. Enter the most realistic world of battle and win the war.
Enjoy this fun addictive game like a true fighter!