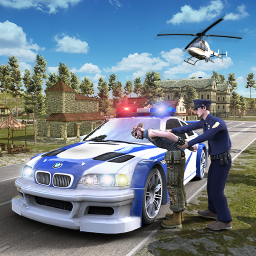 Let’s get ready to chase down the gangsters in your crime city. Crime City Police Car Chase - Hot Pursuit 2018 is a thrilling police car games. In this action-packed game, you have to be a cop who is chasing and killing mafia members in a big city. Your duty is to keep the city safe from all kind of criminals. For this purpose, you have been given high-speed police escape games. Group of gangster mafia has entered in the town and playing havoc with lives and belongings of innocent citizens. You have to chase down all of them and try to control crime level.
In Police car chase Play the Crime City Police Car Chase - Hot Pursuit 2018 game and be the real cop officer and get to know how difficult is to be a law enforcement officer and car chasing the gangsters in extreme duty police vs. crazy car chase games. Chase down the dangerous most wanted offenders, criminals, outlaws on the asphalt roads with your fast high-speed cop chase games for free. Being a police officer when you are driving cop chase games around and want to take down the criminals who are trying to get away. Stop them on the spot arrest and get them to the police station and lock them into the jail while reach at the police station. Survive as a real police officer & a police chasing games to capture crooks and thief in this Crime City Police Car Chase - Hot Pursuit 2018 open environment. So get ready to load your gun and don’t let the real crime city police car chasing games in evil hands of the crime lords, gangsters, thieves, and robbers. Put on your police scanner, cop lights and drive rashly but carefully to chase down the most wanted outlaws over the asphalt & smash them down by doing your very responsible police chase simulator duty.
Do you love to get into a criminal case? The best Crime City Police Car Chase - Hot Pursuit 2018 game is here. Prove yourself as the brave police officer to control crime and chase car escape games from the police. Become the perfect crime city police car games for kids to chase criminals, robbers, and street racers. Hop into the car and chase criminals with great firepower! Have a furious drive on crime city streets with smash, police car chase games. Relive the rivalry between cops and robbers. police chasing games give you an exciting 3D race. Fulfill your duty as a trained crazy cars chase driver to chase mafia. Are you a truck simulator or racing games fan? Do you love driving cars and drift around. You have to be a great off-road driver and shoot at criminals and destroy their cars.