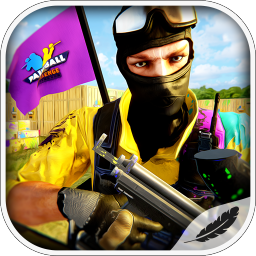 prepare for the ultimate shooter battle experience with the version of faction wars that will blow your mind with their color splash tactile battle. This paintball arena shooting battle involves the usage of the smoothest controls you’ve ever laid your hands on, get the shooting battle paintball combat at your fingertips. Enter the tactical games with paintball arena battle and enjoy splashing and knocking down your rivals in an online shooting competition of real softballs paintball gun fight. Paint ball games have made it so harmless for letting your kids play the sniper shooter games. Airsoft gun games are fun and versatile, this though is the best version of paintball combat & shooting battle.
enjoy three amazing modes of multiplayer battle in this shooter battle softball game
CAPTURE THE FLAG:
Get over there in the are of your enemy, capture the flag in this CTF mode of gameplay. destroy enemy with soft ball color splash attack if need be in paint ball shooting combat arena.
TEAM DEATH MATCH
Choose the team you want or create one by inviting players to join casual shooter game room. Load that paintball gun in your hand and aim with precision on your enemy in the faction wars. Win the shooter battle for your clan in the TDM match.
FREE FOR ALL
The paintball gun fight gets difficult by the hour, score the most points and be the last one standing in war of tactical games. This softball game is jus like any other survivor battle. Take your machine gun in this one of the best airsoft gun games and win like and ultimate survivor!
Paint ball games by tickle studio are real softball games that give you’re a real world shooting experience. Join this paintball combat multiplayer, create customized paintball shooting battle and play the war of colors like no tomorrow! Aim at our rivals and knock them down, finish them and fight with all your spirits against the enemy. Showcase your power packed performance and precise shooting skills in the shooting competition. DOWNLOAD Paintball Arena Challenge 2 - Multiplayer Battle now and play on!