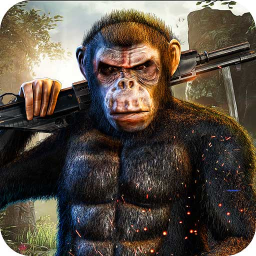 Armed forces kill your Son in Jungle while cutting trees for construction. now it's time to take revenge and safe your other family members. So in this survival game you are playing on a Apes Side. Humans have sent forces to attack apes who live on this jungle planet. So be a great hero of apes and collect all weapons as a apes gangster kill all enemies. Crazy Apes take you on action pack battle mission against human’s troops. As a gangster kill all the enemy troops with your strong gorilla attack. Sneak in the dark forest area, like ninja stealth mood. Use your fighting skills with aggressive cops and wardens to escape mission. Kill the police officers steal their weapons find your way through forest. As a Heroes survival Apes find cave & hunt down animals for food cutting trees build shelter and kill the armed forces that may attack you. you are untraceable in the gorgeous jungle environment. Your surprise attack is furious and fatal for the sniper shooters. Assassinate enemy in the shelters, rooftop and camp, snatch their weapons hunt before you get hunted. Join the ultimate survival battle between humans and apes. With your fatal strike and strength you can kill all enemy soldiers without any hassle.