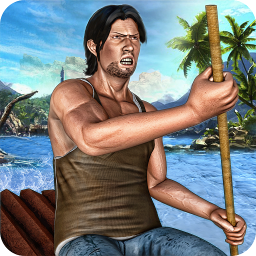 Play Raft Survival Hero to experience the best survival game with realistic graphics and deep ocean environment. There is an army helicopter crash in the middle of an ocean. After the helicopter crash there is only one commando survive from the deadliest waves of ocean and reached on an extreme lonely survival island. Now, he is a lone survivor in this survival games and ready to create his escape story on this island. You are going to fight for your survival by crafting a raft to escape from the island. Find food, hunt animals, build survival tools and put up a shelter & try to survive in a Raft Survival Hero game. It’s time to begin the ultimate ocean survival simulator adventure on the survival island and the sea. A small flaw in the helicopter engine and a massive crash leaving you the lone survivor on the sea.
Use your ocean survival skills to stay alive, battle against the wild shark and try to escape. Hunt wild animal for safety and food, be the survival fighter hero and get ready to find tools and resources that would help you in crafting big raft to escape the sea. Gather the required items to craft a Raft, you will need ropes, metal and wood to start crafting. It’s time to show your skills of animal hunting , raft building and survival skills in this Raft Survival Hero Game. An extreme island adventure is waiting for you where you need to implement all possible escape and survival skills to successfully escape the island through sea after crafting a strong big raft for yourself. Swim the ocean while being on the lookout from the shark and try your best to find a way to escape from this wilderness survival island game. It's not easy because a shark will be nearby, so you better watch out. The challenge is to survive on your raft while avoiding sharks to make a successful sea escape story like a Hero.