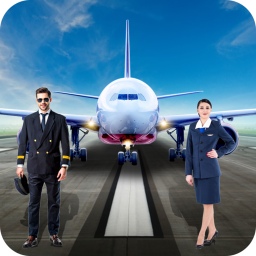 Airplane Real Flight Simulator is designed to let hard-core simmers dig deeply into the minutiae of instrument checklists, or allow newbies to skip the preliminaries and dive right in. High-fidelity audio replicates the sounds associated with takeoff, landing and in-air maneuvers. The controls let you display the full cockpit view, turn your virtual head to look out the windows, go to an outside-the-plane view or even get rid of the plane and look straight down. So just Push the throttle and Pull down the yoke, and there you fly!
All of the aircrafts have been designed and/or reviewed by people who have a lot of hours on the aircrafts. Real life airplanes and aircrafts are ready to fly! Flying the real Cessna to big commercial jets will become easier after flying the simulated version.
Take the controls and fly realistic airplanes in this high quality Flight Simulator. Control your aircraft through endless environments that includes cities, mountains, lakes, oceans and farms, or complete one of many missions available.
MAIN FEATURES:
• Many aircraft types, including: A320, B737, B777, A330, A343, A346, A380, A350 with realistic liveries.
• Realistic physics/aerodynamics with wingflex.
• Ground controls (steering, brakes, pushback)
• Flight controls (roll and pitch)
• Autopilot
• Volumetric clouds
• Fun reward system for gameplay
• Unlock planes
COCKPIT INTERACTIONS:
• Start/shut down engines
• Control thrust amount
• Flaps
• Pushback
• Landing gear
• Autopilot (speed, heading and altitude hold)
GRAPHICS:
• Realistic cockpit
• Realistic airport environment (buildings, taxiways, parking area with jetways, runways)
• Realistic terrain
• Realistic clouds with ability to fly-through them
GAME MODES:
• Classic
• Rescue
• Free flight
• Emergency Landing