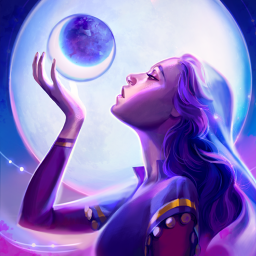 FANTASTIC HIDDEN OBJECT PUZZLE ADVENTURE GAME FROM THE CREATORS OF ENIGMATIS AND GRIM LEGENDS!
Travel to the magical land of Persian Nights and save your sister from a dire fate. Feel the taste of orient in this sumptuous and beguiling hidden object adventure.
LAVISH EPIC ADVENTURE
The day of Mathab is coming to an end. During this time the aura of two moons forbids spellcasting, and the magic community must rely on previously enchanted artifacts. This year, the Academy was full of uncanny accidents which lead to the scrutinous investigation led by the mysteriously looking individual. On top of that, your sister vanishes under unclear circumstances. Unfortunately, it's just the beginning of a heap of troubles that you'll be facing in the far-off orient land!
MYSTERY AND MAGIC FROM THE EAST
Welcome to the fascinating, exotic world of Persian tales and legends. Tame mythical creatures called moonlings and meet other including the fabled simurgh, experiment with magic amulets, traverse through the Academy exploring all its secrets, and reveal who's behind all the atrocities!
TRUE HIDDEN OBJECT JEWEL OF THE ORIENT
Get ready for a highly immersive, enchanting adventure which brings to memory such classics as Aladdin and Arabian Nights, dealing with the orient theme in its own, unique way.
Solving the mystery behind the accidents and saving sister rests upon your shoulders!
• Enchanting orient adventure filled with magical creatures!
• Search through the Academy in 16 hidden object puzzles!
• Rack your brain with 25 riddles and minigames!
• Track the culprit visiting over 42 wondrous locations!
• Visit another dimension in the Bonus Chapter!
+++ WE ARE HERE +++
WWW: http://artifexmundi.com
FACEBOOK: http://facebook.com/artifexmundi
TWITTER: http://twitter.com/ArtifexMundi
YOUTUBE: http://youtube.com/user/ArtifexMundi
PINTEREST: http://pinterest.com/artifexmundi
INSTAGRAM: http://instagram.com/artifexmundi