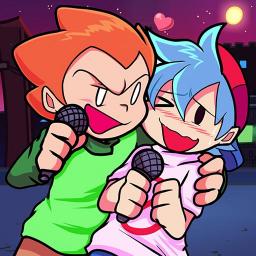 FNF Mobile : Friday Night Funkin is a rhythm game in which the player must pass multiple levels, referred to as "weeks", each containing multiple songs. Each week, the player faces a different opponent.
During "story mode" gameplay, the opponent will sing a pattern of notes, which the player must then mirror by using just tap on the arrow. Later songs introduce more complicated patterns, with the player's pattern sometimes varying from the opponent's or both singers engaging in a duet with Friday Night Funkin.
At the bottom of the screen is a bar indicating how well the player is doing. The left side of the bar is red, representing the opponent. The right side is green, representing the player. Successfully hitting notes will increase the size of the player's bar, while missing notes or pressing when there are no notes will cause the opponent's bar to expand Friday Night Funkin . The player fails if the opponent's bar fills up the entire bar. The player wins if their bar survives for the entire song Friday Night Funkin .
For each week, the player has the option to select one of three difficulties: Easy, Medium, and Hard. As the difficulty increases, the speed of incoming arrows increases and the patterns of arrows become more complicated. The player's high score for each week on each difficulty is tracked and shown in the top corner of the week selection screen.
The player can also play in "free play" mode, where the "week" structure and any cutscenes are ignored and the player can play any individual song on its own.
Whats are your waiting for just click on install button and download ''FNF Mobile : Friday Night Funkin'' NOW!!!