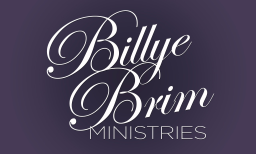 Watch Faith Building Messages with Dr. Billye Brim. Join in World Wide Prayer with the live broadcast. Strengthen your Spirit with Prayer Mountain in the Ozarks.

Billye Brim’s Christian heritage is rich. She sensed the call of God in early childhood. However, it was only after an encounter with the Holy Spirit in 1967, that she as a young wife and mother of four began to follow Him to walk out her call. For almost ten years she served as Editor of Publications for Kenneth E. Hagin Ministries where she also taught at Rhema Bible Training Center.

Immediately after ordination in 1980 she traveled to Soviet Russia in what proved to be ongoing ministry there. Since then she has literally ministered around the world several times over.

Kent and Billye Brim with Lee and Jan Morgans founded a local church in Collinsville, Oklahoma. A Glorious Church Fellowship is the foundation of Billye Brim Ministries and Prayer Mountain in the Ozarks in Branson, Missouri, and the soon-to-be-built Migdal Arbel Prayer and Study Center in Israel.

When Kent passed away in 1986, Billye was led to “study Hebrew in the Land.” Studying at Ulpan Akiva in Israel led to the unique Seminar Tours she has guided in the Land from 1986 to now. It also provided a pattern for the Prayer and Study Center in Israel.

“Helping Pray-ers” is a God-given directive in her life. One place this happens is at Prayer Mountain in the Ozarks near Branson, Missouri. On 200 plus acres log cabins provide places for individual prayer, or small prayer groups. Corporate prayer meetings are held twice a week in the chapel.

On Wednesdays at 12 Noon Central Time, the meeting is streamed live. Pray-ers (who have named themselves World-Wide Pray-ers) join in united prayer via thousands of computers in more than 60 nations. This prayer is focused primarily on an Awakening to God. For in a corporate prayer meeting in June 2008, Billye Brim and the pray-ers were impressed with these words: One thing will save America…an Awakening to God. One thing will avail for Israel and the nations, An Awakening to God. Several thousand pray-ers from around the world gather in Branson for an Autumn Assembly of Prayer she hosts.