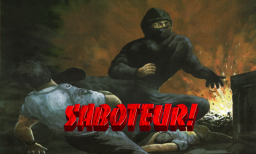 Saboteur! is back in the extended and enhanced Ninja game for your Apple TV. Featuring all-new graphics, gameplay and plot over hundreds of screens, this game is part remake and part sequel.

You are sent on a mission to infiltrate a guarded secret facility to retrieve a floppy disk that contains the name and locations of world’s top rebel leaders. Optional objectives include blowing up the facility and/or killing all guards in it. The escape is done by helicopter on the top of the building. As far as the story and other dramatic game elements go it is a straightforward game.

If you upgrade to the full version, you will get :