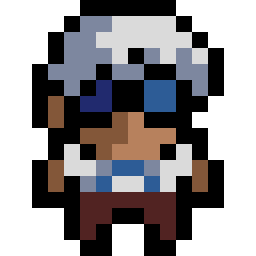 Explore and fight your way through nature, urban and abstract themed areas in the human Young's subconscious, evoked by a 16-bit-era visual style and a moody, dream-like soundtrack.

Anodyne is a full-length adventure created by Sean Han Tani (programming, music) and Marina Kittaka (artwork, writing), and is now available on your Android device.

* Explore the subconscious of Young , and adventure through over 20 diverse areas.

* Features an original, 60+ minute soundtrack, to accompany the world of Anodyne.

* Featuring over 6 hours of gameplay, and NO IAPs! Buy the game once, play it forever.

* Extensive use of a household item.

Anodyne was an honorable mention in the 2013 Student Independent Games Festival awards, and received a spot in ESA's 2013 Student Showcase at the E3 Expo.

"[!anodyne!] the substitution of a save-the-princess story for bizarre psychopomps and solipsistic explorations of the human condition." - Indie Statik

"The locations are vibrant and detailed, going to all manner of different places." - Mash Those Buttons

seems poorly optimized and buggy for a mobile port