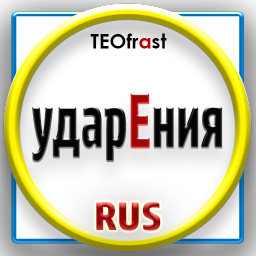 The stress in the Russian language.
Correctly to put an accent in a word is sometimes a difficult task for the media, not only foreign, but also native Russian language. However, in everyday, and particularly business communication is extremely important, because correct speech is the key to successful communication.
How often do you hear the wrong accent in such words as "cakes", "beautiful", "directory", "quarter", "contract", etc.?To facilitate the search of answers to the questions such as Where is the accent in a particular word? this application has been created. This topic is quite difficult to grasp, because the samples of the sound of words a person perceives on hearing and copies them from the speech of the people around him. It is therefore very important to provide the opportunity to hear the correct accent, and what distinguishes this application from many peers.
Also in today's reality, the theme "Stress" is relevant for all students because it is found in the exam on the Russian language. It would seem that there is nothing easier than to put an accent, and everyone can say to yourself, "I Decide use, at least, the task 4 tests the exam on the Russian language is very easy". However, as practice shows, orthoepic norms are not learned by all the graduates. This app is to help all those who prepare for the exam 2017: tests with answers in the appropriate format is a great opportunity to practice task 4 the exam on the Russian language.

- designed for learning the correct production of the stress in words which are often pronounced by native Russian speakers incorrectly.

- allows you to prepare for the task 4 of the format of the exam on the Russian language, tests for which are fully based on Pronouncing the exam at least 2017;

- involves passing a number of tests, each of which consists of 10 tasks and is evaluated on a scale;

- gives the opportunity, after passing the tests to know the time spent for the decision of tasks and the average result;

Every month there is an application update that enables users to constantly improve their knowledge.