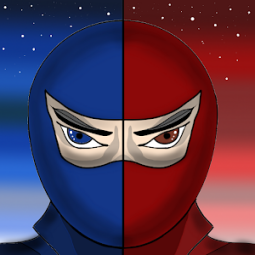 Portals were accidentally opened between the two parallel universes. Can you save both universes at the same time?
The red stones from the red universe can only be destroyed by the red ninja.
The blue stones from the blue universe can only be destroyed by the blue ninja.
With the portals opened in two universes, stones can fall into the other universe.
Ninjas can be replaced with other parallel universe version.