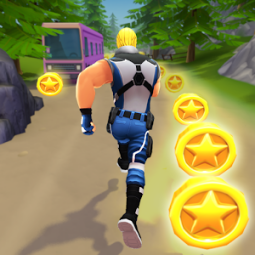 Battle Run is here, in a brand new non stop action filled experience! Compete in high-speed battle runs across the royale Island to save it from the influx of menacing robots! Smash crates, avoid obstacles and defeat the oncoming enemies…Can you defeat the bot bosses? – all with thousands of possible character combinations!

- Running, sliding and jumping and with your favorite battle royale characters.
- Run across iconic locations and explore the suburbs , the forest, the evil robot base and so many more!
- Surf into Portals that will transport you to a secret location to complete in missions and find secret items
- Battle the best bosses across the island and unlock cool rewards.
- Build up your running skills and scout the Island to defeat all Robot minions in epic battles.
- Beat them with style: customize for extra XP points!
- Drop into the gameplay with your glider
- Get a better view of the landscape while riding the flying PInata! Pinata Party Time!

Upgrade your weapons and hoverboards and make quick work of your task!
- Crash into different crates to collect your upgrades
- Go on battle runs and unlock rewards to build up, upgrade and customize your runner.
- Go on the run and unlock challenges, characters and rewards to give your game a boost.
- Classic endless runner gameplay with a shooter spin.