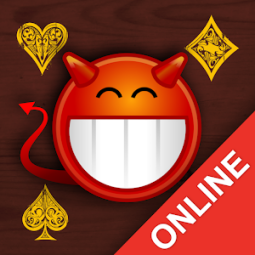 Easy to learn but tactically demanding and with a lot of long-term fun: Predict the number of tricks per round, bid correctly and correctly assess your card hand, but also factor in the announcements of your opponents.

Oh Hell is a descendant of the Whist family of card games, which also includes Bridge, Hearts, and Spades

Whether at break times, on the go or at home, a push of a button is all it takes and you play Spades online with thousands of other players - or play against the computer without the Internet

♠ Free card game for your smartphone or tablet
♥ Cross-platform for almost all cell phones and tablets
♣ Free online Oh Hell multiplayer: play card games in public or with friends in private multiplayer rooms all against everyone, instantly and without waiting
♠ Chat in the card game with other Spades players
♦ Offline training mode against the computer - play without internet
♠ Entertaining, ideal for in between
♥ Easy to learn, simple rules, tactically demanding: Achieve the most points with clever announcements and calculated risk
♠ Authentic, loving design, intuitive operation: Playing Spades cards like in your local pub
♥ 4 card sheets - French skat sheets, classic cards or double German playing cards like Schafkopf or Doppelkopf
♣ Daily, weekly, monthly rankings - level up, compare yourself with your friends in online leaderboards

NUMBER OF STARTING CARDS
The game consists of a series of hands. The first hand is played with 5 to 10 cards dealt to each player

OBJECTIVE OF THE GAME
The objective is for each player to bid the number of tricks he thinks he can take from each hand, then to take exactly that many; no more and no fewer. Initial bids are made sequentially and in each new round the next player in line starts to bid first. After a round is finished the next round will start with one card less. The last round starts once each player has only one card

TRICK TAKING RULES
In each round a trump suit is randomly selected and displayed in middle of the playing table. The suit of the first card played in each round must be played by all other players following. Players do not have to play a higher card (make the trick) of a given suit but as long as they have a card of the same suit, they have to play a card of this suit. If a player does not have a card of the same suit, the player is free to make the trick with a trump card or to just play any other card

GAME SCORING
Each trick made is awarded with one point. If a player makes exactly the initially called number of tricks, 10 bonus points will be added to the final score.