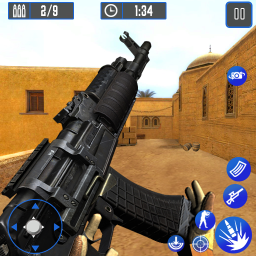 Get ready to shoot and kill in this action packed game of Special Forces, who have joined hands to make sure the failure of the brutal missions of terrorists in US. This GRAND GUNNER WAR is the best shooting game and you are the best army shooter, aim and target the ruthless special ops critical missions. Let yourself be the part of this action adventure filled game while leading to face the strong warriors with levels and alarming missions.
US Army special forces World War 2 is the best awaited game of US army frontline soldiers against terrorists. You have to build a strong defensive shield in warfare strike for the survival of most esteemed citizen . US army has trained special mountain sniper to make sure the continuous sniper shooting. There is wide range of commando shooting drills working against hidden terrorist teams. A destructive frontline fury is being shown in the Morales of frontline commandos. Some spy agencies are also working on secret missions. Spy agencies got to call by the heads of US Army Special Forces WW2. Spy agencies have been called to monitor the highly confidential missions so this is the call of the sniper spy duty.

US Army special forces WW2 brings you to collaborate with special forces team combined with US military ,CIA agent US navy in Grand Gunner Battle 2018 ,You have to make counter attacks to the terrorists and get rid of those brutal criminal of world war. This is the best shooting game for Free. You have to chase enemy lines and shoot the terror spreading enemies.1911 is the alert to avoid any serious damage to your team. Be a true commando of Special Forces World War 2 and defeat all criminal acts in this battlefield of elite commandos.
US Army special forces World War 2 is an extensive war of adventurous missions ruled by elite commandos and assassin shooters, congregated to make Special Forces to fight the commando forces elite war. This GUNNER GRAND WAR calls for the blood and patience of Gunner war shooter in fps missions. You have to call for critical fps strike to eradicate the roots of terrorism in this battle of elite sniper shooters. The best warfare fps has already been trained. You have to face the critical missions in this grand gunner shoot war 3d. You can show your dominance by brave actions of this gunner shot elite war 3d.You have no chance to lose this modern counter shoot in critical war gunshot warfare strike. Maintain your courage and stamina in this fierce battle and face all the life threatening missions to prove yourself a real army commando hero in this modern counter shoot battlefield against the enemies.
This is the best royal action filled fps game you have ever played. A critical war is going on among Special Forces of world war2 commando and elite forces. Your enemies are well trained for this fierce battle of sniper assassin misssions.US army commando has sent trained strike forces in this war of real elite shooters in this grand battle action filled game. You have to do the commando duty very determinedly in the warfare. US ARMY has called for the best of sniper duty coaches for you. This is the call of infinite warfare combat, use your fierce battle shooting skills, Being the Green Berets, target and shoot as you have the best equipment i.e. elite sniper, World War II, Grand gunner shooters. Sniper hunter teams have been sent in this real action packed game of World War 2 for counter terrorist attacks. You are going to be the part of the thrilling grand battle under the supervision of Special Forces of US army. Emerge from destructible cover points and beat the best number of enemies in this battlefield before your time is up.
US Army special forces World War 2 is going to best the best action game of 2018.
Features:
=> Realistic battlefield
=> Thrilling missions
=> Variety of WW2 weapons
=> Precise controls
=> Console quality visuals
=> Exciting mission
=> Grand Gunners shooters mode

I love this game