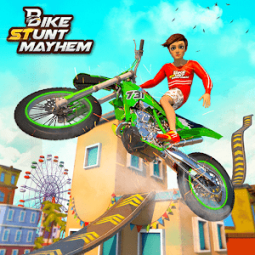 Say yes to the racing bike lifestyle! Start the adventure of crazy bike stunts! Bike Stunt Mayhem is a must have bike racer game for all real stunt riding masters!

LEGENDS LIVE FOREVER
Bike Stunt Mayhem is the most exciting & dangerous vehicle bike simulator having tracks for beast bikers, motorcycle stuntmen & dirt bike real stunt heroes! So, what are you waiting for? Start the engine, hit the gas and experience the thrill of handling stunt bike in the arcade of Bike Racer Moto Games.

REAL-TIME STREET RACING
The gameplay of this vehicle motorcycle simulator is very simple and interesting. In this Extreme jump Stunt Bike Game, you just have to race your real jump bike, avoid adventurous hurdles in the way and reach the destination to complete levels. This New Racing Bike Motor Game with multiple smooth controls, Dynamic camera views and realistic driving experience enable you to perform crazy stunts in free bike stunts games 2020. Are you ready for stunts in Extreme Stunt Bike Games 2020? Use nitro for boost and then complete level of bike stunt jump in impossible bike games. Extreme Tricky Bike Stunt Motorcycle Game is a premium app which is highly recommended for you and all age groups.

SHOW OFF YOUR CRAZY BIKE STUNTS
Sports Bike used in Bike Stunt Mayhem: 3D stunt game is totally friendly with real physics. Moto Bikes in Trail Stunt Dirtbike Games will make you feel that you are in a real Motor Bike Jumping situation and driving a real stunt Bike on breath taking tracks in Stunt Riding Racing Games. Drive your modified racing bike sensibly so that you can be a hero in extreme bike stunts zone. In this awesome jump bike simulator, you have a chance to take your bike to the skies and become the King of motorcycle games!
Bike Stunt Mayhem motor cross 3D is easy to engage in recreation but hard to master which will keep you in the zone of motor games for hours. Just Download & start enjoying…….!