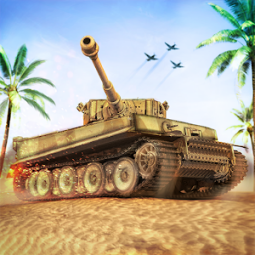 MMO Military 2 Tank Game: All War Games machines 2021
Are you looking for Army tank Shooting Games 2021 and want to win an Army tank Gun machines Game. The wait is over and here is the best Army Tank Battle Games 2021 for you can Download our free tank machine games and play this game if you want to win an army shooter tank driving machines game so to get experience from our offline New Tank war games machine learn new army driving skills. play the military machines game and Destroy the enemies before they finished you. Tank driving is the best mobile shooting game you have been looking for in a new desert sand destination in tank game. You drive your tank with the new players in different places view through the endless gun shooting tank game and impressive environment. Tilt your device to control your tank, overtake traffic, earn coins and buy new tanks in machines game. Meet a legendary MMO shooter in army game for your mobile device! The part of a community of millions of players from across the world like Japan and the USSR, take a vehicle and tanks into your first massive tank war game machines and win! Check out the extraordinary variety of vehicles, maps, modes, and possible strategies or planning that this tank shooting army game has to offer.
A snow-covered base at the edge of a metropolis, and an eastern city of the world. Discover huge maps and modes in fps tank shooting games. shoot the enemies and save your tank game mission is to blast enemy tanks faster than they destroy you. Glory modules include different passive tank game attachments and show your skill in-tank war games machines. This game required 22mbs with a stable internet connection will require. In-tank game world, war vehicles choose from the Us and Germany. Pvp shooting offline games with the developed progressive system. Seek glory in rating wars or participate in tournaments with different prizes.