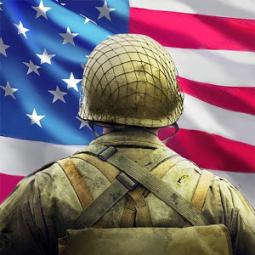 WW2: World War 2 Strategy & Tactics games is the latest strategy games and rapid tactical war games set during the turbulent period from 1941-1945.
You will play the role of famous generals for various major countries, Rommel, Guderian, Manstein, Zhukov, Konev, Rokossovsky, Vatutin and other military geniuses will follow you to dominate the entire world.
The war games are about to begin, act as commanders and lead your army to conquer the world! Relive the flame of the greatest battles in this military strategy WW2 war games!
Features
Experience historical moments and famous battles in world war 2 such as
Civil War, Minsk Campaign, Siege of Kiev, Leningrad Defense War, and Kurs War in WW2.
Join WW2 battles with famous generals such as Rommel, Guderian, Manstein and other world war 2 generals.
Powerful firepower weapons give you the best experience of strategy games. armored artillery, battleships, heavy cruisers, destroyers that appeared in World War 2.
More than 30 large-scale battlefield maps in war games.

Conquer the world
Mobilize troops, charge into battle, rekindle the battle of the WW2.
Lead the German army eastward or join the Soviets to defend your homeland in WW2.
Adjust strategic objectives and produce military units according to the battlefield in WW2 war games.
Random events will ensure endless replayability and the uniqueness of each game session. Make your own history in the war games.
The combination of terrain, generals, weapons, and troops makes each battle unique and gives you the best experience of WW2 strategy games.

Legion
New troops & weapons in the field of WW2 war games!
Such as paratroopers, engineers. Use Katyusha rockets to sweep the battlefield!
Famous legions of WW2 such as Guderian's Grand German Division, Imperial Divisions, and Devil Divisions.
The proper arrangement of troops and the usage of generals is the key to victory in WW2 strategy games.

Domination
Win the battle to explore more famous battlefields in the WW2 strategy games.
Develop your army with resources from conquered territories, upgrade the national technology.
Study new technologies and improve the combat effectiveness of all units in WW2.
Choose excellent generals to fight side by side, promote their ranks and pick the suitable skills for them in the war games.

Challenge
The fog of war, beware of enemy ambushes. Terrain restrictions make the battlefield more complex.
within the specified conditions, which will test your commanding skills in WW2 strategy games.

We are eager to hear your thoughts or suggestions!
Facebook: https://www.facebook.com/Strategy-CommanderWW2-Community-343526342834960/