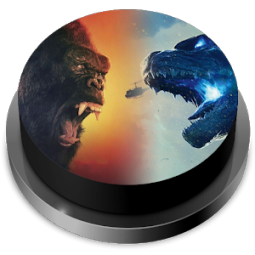 Put yourself in the shoes of the big Kong 🦍 facing off against Godzilla! Who will win? Who will be stronger? Keep analyzing the battle of the century! Download the app and freak out with the creepy roars of these two beasts, GODZILLA vs KONG!

Press the button anywhere and impress everyone! Now you can use this app on your device, be it mobile phone or tablet 📱. The best app with the best roars has arrived! Have fun and keep up the hype of the great movie, Godzilla vs King Kong! 😱

Who is stronger, Godzilla or King Kong? 🤜🤛
Godzilla 🦖 is stronger, but Kong 🦍 has better dexterity.
He tackles opponents, rips open jaws and whacks targets with his tail. By contrast, Kong is smaller and weaker, but he utilizes his strength better due to his larger limbs. He's able to punch, tackle, grapple and kick adversaries

Who is Kong? 🦍
King Kong is the name of a gigantic fictional gorilla that lives on Skull Island ☠️, and that has been the star of several films, in addition to having appeared in other media, such as television series, books, video games or comics, having become for it in one of the icons of modern popular culture

Who is GODZILLA? 🦖
Godzilla is an enormous, destructive, prehistoric sea monster awakened and empowered by nuclear radiation. With the nuclear bombings of Hiroshima and Nagasaki ☢️ and the Lucky Dragon 5 incident still fresh in the Japanese consciousness, Godzilla was conceived as a metaphor for nuclear weapons

Downloading and installing this app you will get:
- A custom button with the faces of Godzilla and Kong facing each other 🦍 🦖
- An exciting gif of Kong and Godzilla fighting! 🥊
- An incredible background with the two beasts ready to fight 🤜🤛
- The sound of the incredible roars of King Kong and Godzilla 🔊

Don't forget to comment and share this app with your friends if you liked it, you will help us a lot! You can also visit our Play Store account to find endless apps like this one!