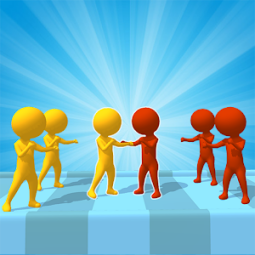 Get as far as you can in this crazy run race adventure! Lead the crowd until you reach the finish line and fight to win the Treasure Clash. Dodge the deadly obstacles, giant axes, rotating saws and reach the castle with maximum soldiers the fight and WIN!

Reach the finish, fight with the rival soldiers and defeat them to capture the fortress in Treasure Clash.