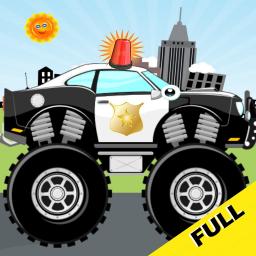 It’s time for some police fun with Police Games For Toddlers Full! This entertaining and imagination evoking app was designed by teachers with over 15 years childcare experience, using their philosophy of learning through play. With over 50 police games and sounds this app will get your little one excited about playing with police! With the police sounds and sirens they will delve into different worlds like a cowboy sheriff, a circus, and even a trip to the North Pole to help Santa pull his sleigh.

Then your little ones can drive a police car in these different worlds and collect cute and cool coins as they go, and when they collect the right amount of items they get to count what they collected! And to continue the interactive fun your little one can play the spot the difference, also themed to match the worlds they played with in the sounds and drove in… it ties everything together so your child can have an enriching experience. The Police Games For Toddlers takes playing with police cars to another level by adding creativity and learning and so much police car fun!

Police Car Sounds
If the sounds of sirens thrills your little one they will adore the Police Games For Toddlers sounds! Each interactive sound will take them into a different world where they can see and hear different police vehicles. Every sound also includes some fun music or effect that further delves them into that world. The different themes include a Cowboy sheriff, a circus clown, space police, pirate police, a detective car looking for puppies, and even a Halloween police truck that squishes a ghost and a Christmas car that helps Santa pull his sleigh. These creative sounds will delight and ignite imagination and fun!

Police Driving Game
Driving a police car is the exciting part of being a police officer and now your little one can get behind the wheel! Just by pressing the screen they will be driving over hills and other obstacles while collecting coins. But this is no ordinary driving game, and it’s not always coins they will be collecting because every game will take them into a different world, the same worlds as the sounds! They will be collecting fun things like horseshoes, candy corns, candy canes, and paw prints, which makes it even more fun to drive. Designed specifically for younger children the police driving game is age appropriate for young drivers and will also ramp up their imaginations!

Driving Game Reward
As they drive they will be collecting fun items and when they have collected the right amount the reward will be counting the items, from 5 to 15. It’s a neat way to practice counting, learn number recognition, and sharpen their cognitive skills! Police Games For Toddlers takes a traditional driving game to a whole new level!

Police Spot the Difference
Put on your detective hat for another truly delightful game… spot the difference! Not just the usual game of spot the difference, this police game again delves your little one into the different police worlds they have played with in the sounds and drove in with the police driving game. Using the animations from the sounds they will get to spot the difference on not only police cars but also puppies, cotton candy, witch hats, snowmen, and even aliens! They will have a blast finding the one different object on the page, and after 4 games they will be rewarded for their detective skills. And with 32 games in total they will truly be sharpening their cognitive, recognition, and concentration skills.

Sound the police sirens and have a delight-filled time playing with police cars and driving them in Police Games For Toddlers Full Version, where learning through play encourages your little ones to have fun while sharpening their imagination and skills. If your little one loves police cars and sirens this is the app for them!