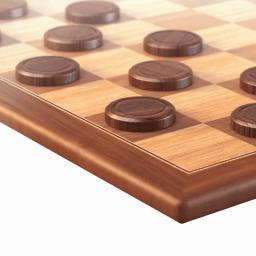 Checkers is a game for 2 players. The players sit on opposite sides of the checkerboard, and position their 12 pieces on the 12 closest dark squares. One player has 12 pieces of one color, the other player has pieces of another color.

If a player is able to jump and capture an opponent’s piece, the rules require that the jump be made. However, in Settings in this app, this rule can be turned off.

When a player’s piece arrives on the furthest forward row of squares (the opponent’s side of the board), the piece gets crowned and can then move or jump in any direction diagonally.

The game ends when one player has lost all his pieces or is unable to move.