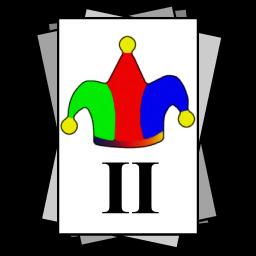 AHole II is a remake of a popular drinking card game for the iPhone and iPod Touch.
In spite of its name, there is nothing rude or offensive about this game.

Three "Skill Levels" are available, allowing the game to adjust to your abilities as you learn how to play.

There are many variations to the rules of the game — some of the most common variations are supported through the Game Settings screen.
The goal of the game is to get rid of your cards before the other players.
The first player who is out of cards is awarded the highest social rank — this is President — the next is Vice-President, and so on down. The last player to be left with any cards is the AHole.

Visit the application support Web page for the complete rules and a video demonstration of the game.