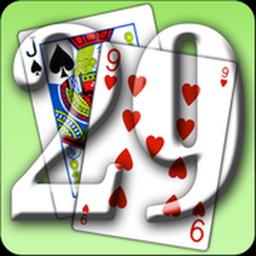 Twenty-nine or 29 (it is also called 28 sometimes with minor variations in rules) is a very famous card game which is played by four players in fixed partnerships. The players facing each other are partners. The game is played with 32 cards comprising of 8 cards from each suit. Jack (3 points), Nine (2 points), Ace (1 point) and Ten (1 point) are the only cards which have points. Thus making a total of 28 points. The teams need to bid and set a target for themselves and then achieve it. The player who wins the bid gets to set the trump suit thus biasing the game towards them. The opponents need to achieve 29 - (bid) to stop the bid winner team from winning the game. This is where the game gets its name '29'.

Have a wonderful time playing the game. We will be churning out more updates to the game. Do let us know what other features you would like to see in the game.