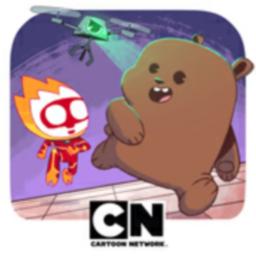 Cartoon Network’s Party Dash is a high-energy arcade platformer featuring many of Cartoon Network’s most beloved characters. Party Dash is a blast to play with fast-paced, hard-hitting action – descend floor by floor, smashing and rebounding through enemies across a variety of levels. Unlock powerful gear and perks to help you reach new levels and even higher scores, and customise each character with their alternate outfit!

When a bunch of villains crash a party hosted by Ben 10, the Gumball crew and the We Bare Bears bros, it’s up to you to crash back! Choose from over 10 playable characters, including Gumball, Darwin, Anais, Penny, Grizz, Panda, Ice Bear, Heatblast, Four Arms, XLR8 and Shock Rock, then dash into action to defeat the villains.

Dash through obstacles and ricochet off enemies as you race to the finish in crazy fun platformer levels! Smash all the monsters, ghosts, drones, and karate pigeons you can! Fill your combo meter for an invincible burst of speed! Cash in your coins for power-ups and gear, or party in style with unique costumes and fun hats!

THREE EXCITING WORLDS!
Dash your way through different worlds based on environments from Ben 10, We Bare Bears and The Amazing World of Gumball! Race through the tree tops of a huge forest, leap through the scrap of a giant junkyard, or have a relaxed race through a tropical paradise!

DROP THE BEATDOWN!
Dash through obstacles and enemies as you race to the finish on crazy levels! Smash all the monsters, ghosts, drones, and karate pigeons you can. Fill your combo meter for an invincible burst of speed!

AWESOME UPGRADES!
Cash in your coins for powers and gear upgrades! Each item gives you special level boosts, like double dash, extra life, bubble shields, and a smash hammer!

PARTY OUTFITS!
Party in style with unique costumes for all 10 characters. Mix things up with fun hats from Adventure Time, The Powerpuff Girls, Steven Universe and more!

If you're having any problems with this app, feel free to contact us at apps.emea@turner.com. Tell us about the issues you're running into as well as what device and OS version you're using.

Before you download this game, please consider that this app contains:
- "Analytics" for measuring the performance of the game and for understanding which areas of the game we need to improve;
- Device reminders / push notifications to let you know when we have exciting updates like new content;
- ‘Non-targeted’ advertisements provided by Turner ad partners.
- In-app purchases that cost real money.