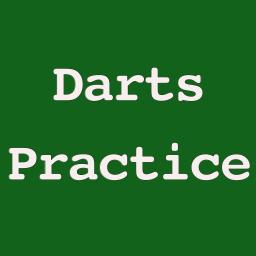 Do you struggle to hit those doubles, trebles, singles, when playing darts? I do. Practice makes perfect or so they say. But what to practice. What is your worst double, treble or single? You think you know but what about your next worst, and the one after that. It is not easy to decide what to practice next that's why I wrote an App to keep track of all practicing done. So each time you practice a double, treble, single you enter the number of darts needed to hit what was required. The App remembers this information and over time can show you what is your worst, what is your best and what is your 3rd best, 8th best and so on. Each time you decide to practice doubles, trebles or singles it shows you a list of the ones it thinks you should practice.

The App is split into 4 practice areas: Singles, Doubles, Trebles and All of them.

So if you want to practice your doubles then select the doubles practice option. The page changes to show you the list of doubles. The order the doubles are shown in changes depending on the previous practices for the various doubles.

The general idea of the ordering is to present them in a list of worst to best based on the average number of darts to hit the double. However, the ordering is also affected by how many times you have failed to hit the double when practicing and also when was the last time you practiced the specific double. So, even a good double will move up the list to the top if you have not practiced it recently.

You can allow yourself as many darts as you want when practicing a double but if you just cannot hit it then it is best to give up at some point. Now you do not have to record this failure but if you want to then select the correct row and then enter zero (0) for the number of darts. This triggers a special case where the practice is recorded as a failure. It does not change the average value. The number of times you have failed to hit the required double alters how high up the list that double is placed.

All the above information applies equally to the singles and trebles. The bull and double bull count as singles.