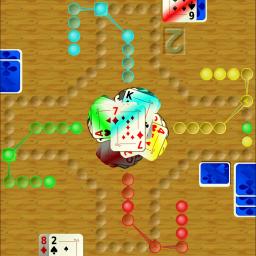 Dog is a popular board game with cards. Your goal is to get all your and your partner's marbles into the target area before your opponents do. Our app is available for iPhone, Mac, iPad, and iPod touch. It recently reached rank 3 of all games in the Swiss App Store, with thousands of ratings at an astonishing average of 4.7 stars, and ranks regularly among the top ranks for card and board game apps in several countries.

Dog for iPad, iPhone, and iPod touch lets you play on boards of variable size, and offers a variety of bot players with different characters and strength that you can select as partners or adversaries. In addition we offer the following rule variants:

The complexity of the game literally explodes with the Canadian 7 split rule. Millions of different moves are possible in some situations. We had to rebuild almost everything to ensure that even in such cases you can select every possible move without delay, and that our bot players can analyze and compare every single move. We have therefore decided to offer these variants as in-app purchases.

Invite friends to a multiplayer game, or find other players on the Internet! The players see your board and play their cards and marbles on their iPhone, Mac, iPad, or iPod touch. Your devices communicate easily over the Internet via Game Center, or locally (no registrations needed) via Bluetooth or Wi-Fi network. The app supplies bot players on empty game seats, so you can finally play with your friends even if you are missing a third or fourth player.