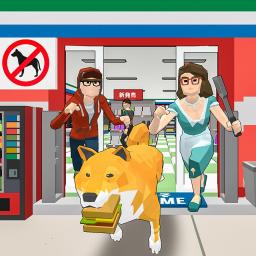 Welcome to first ever dog shiba inu thief simulation assassin game in 3D.
It’s a dog thief master shiba inu game with stealth and sneak game mission.
Become the king in thieves’ line & steal food from the convenience store.
Complete your daily thief stealing target playing this best thief game.
Stealing in this dog thief simulation game is fun.
dog thief robbery games” is first thief assassin simulation of its kind with stealth game activates and food robbery.
This shiba inu dog thieves games is all about challenging and exciting mini games that tests your quest solving abilities for stealing foods.
Hints & clues are there in the store shop thief so steal the worthiest you can playing this robbers foods robbery game.
Your 1st step being a notorious thief is infiltration in the house and store when no one’s home so execute sneaky moves & thief shiba inu dog assassin simulation activates.

Steps out of the shadows, sneak assassin into the room full of securities. Steal assassin your way to the top of all thieves’ worldwide experiencing foods robbery & store thief game. King in thieves’ line foods robbery game challenges you with different kinds of traps and tickles. So be prepared thief for witty puzzles as you try to take the honor of King in thieves’ line. Can you prove you are the smartest and most skilled thief hunter in the world? Loot your heart out notorious thief. This biggest thief is going to steal everything from precious jewelry to old pairs of clothes, to those hard to find remotes, money and jewelry!! Empty store safe by executing biggest foods robbery assassin in the history of thief stealing games & hunter foods robbery games.

Operate in complete silence bugler and remain undetected as you steal foods from the most secure store and shop. You might have played secret agent stealth game with dishonored stealth hero thief game. But this store robbery simulator is different from online assassin games. Avoid security guards to make robbery, move corner to corner, sneak past security guards pick security locks and execute successful infiltration. It's all part of your daily occupation as a notorious thief.

The key to completing successful assassin missions in this stealth thief assassin hunter game is remaining undetected. Time is the key execute extreme robbers’ missions in the allocated time. Clues may lead your way to something more precious and worth stealing. So steal as much as you can in your dog pet thief life. Prove yourself a stealth hero in the line of thieves. You often have multiple stealing options, select something which is the most worthy of all in this ink game. You don’t have to take-down a guards with stealth mode. You will simply sneak by and break into the house for stealing with metal gear. Become a tiny thief stealth hero of stealing assassin games.
Control the assassin and hunt down your targets one by one. Use your surroundings and shadows to stay hidden from flashlights.

Introducing the Shiba Inu Dog of Steal…
Play as Shiba, the hapless burglar intent on changing his ways. Unfortunately for Shiba, however, he's going to be forced into a few final jobs before he's allowed out of the criminal life.

• SUPER SNEAKY
Sneak past security guards, residents and sleeping bulldogs as you recover the loot in each stage. Use your ninja-like skills to hide in some tight squeezes and avoid detection.

• THERE GOES THE NEIGHBORHOOD
Your sticky-fingered missions will take you through a local neighbourhood, Downtown, and even through some secret labs. Can you get a perfect on every one?

• LOOT YOUR HEART OUT
Shiba dog is going to have to pinch everything from secret documents, to old pairs of clothes, to those always hard-to-find TV remotes!

• CRIME IS A FUNNY OLD GAME
Get engrossed in the comical storyline featuring hilarious animations, a fun script and a genuinely twisting narrative.