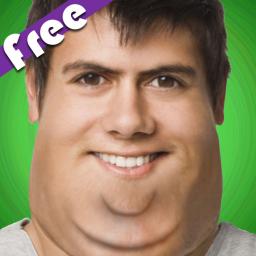 Gaining weight is now fun! FatGoo is the ultimate app for creating hilarious fat photos of your friends and family. In just a few clicks, you can see what it looks like to pack on a few or even a *lot* of pounds. You can even customize exactly how the fat looks with your finger!

Interested in FatGoo, but not sure you want to spend the money? Try FatGoo Lite! Then upgrade to the full version to unlock lots more fattening templates, extra samples and an advertising-free experience.

FatGoo is by the makers of FaceGoo, the original hit face morphing app for the IPhone and IPad.

Key Features:
- Starting with a camera or gallery photo, FatGoo will detect the face and then magically fatten it.
- FatGoo offers multiple different kinds of fattening templates - if the double-chin isn't big enough for you, try triple-chin!
- Use "Finger Fat" mode to make your photos even more outrageous, stretching and twisting the face fat by touching the screen.
- Includes over a dozen sample faces you can fatten to your heart's content. And even more in the paid version.
- Upload to Facebook and Twitter, or send images via email (available in paid version of FatGoo).

How to use FatGoo:
1. Pick a face photo using your camera, from the Photo Library or using one of the included sample photos.
2. FatGoo will then automatically find the face in the photo. Front-facing, neutral faces work best!
3. After detection is complete, FatGoo will ask you to confirm it has detected the facial features correctly.
4. That's it - FatGoo will supersize your face. Tap the screen to toggle between the original and enlarged faces.
**Bonus - try the "Customize" button to see other fattening templates, like "Big Head", "Pig Nose" or "Pie Face"

FatGoo was made with love by Springy LLC. Keep an eye out for our upcoming apps!