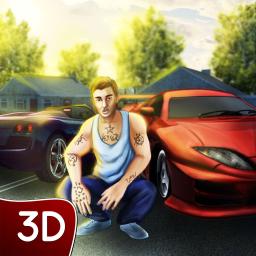 Rush into the city streets full of criminals and ordinary citizens! Be the member of one large gang, which can do everything possible to gain the authority! Roam about this urban place, rob, ruin and exterminate, make scrambles and escape the police! Play our new ultimate Gang City Wars - Cars Chase game and you absolutely won’t be disappointed!

Watch the mini map to prevent bad situations with cops or other cruel clans, ‘cause if you’re suddenly arrested or dead – the game is over! Feel the power of city bandit clan and just enjoy it! Become the hero that city never asked for! Destroy, defeat, run away ad just have fun

Rush into this big city filled with sins, reckless citizens and desperate madmen! Roam about the large modern city streets, steal cars and crush shop windows, ‘cause you can do everything! Beware of cops – it’s their duty to catch such evil persons as you are, so they will try to do it by any means! Show them all how skillful you are playing Gang City Wars - Cars Chase game! Enjoy all your possibilities and have fun!

Earn points for successfully done missions and power your gangsta man up making him really fast, dexterous and dangerous! Buy new types of interesting weapons to ease your city conquering and just have fun!

Gang City Wars - Cars Chase features:
• Opportunity to become a real city hooligan
• Various types of missions and quests
• City like a large open world – do what you want!
• Great surroundings made in 3D

Tired of saving large cities from criminal scums and bandits? Want to change the side? Here’s your real chance – just download our new Gang City Wars - Cars Chase game and feel like a real gangster roaming about this urban place and doing what you want!