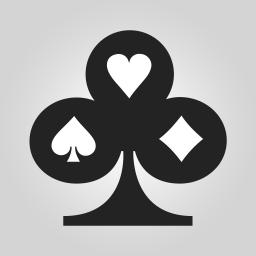 Features:
- In-game currency for bets
- All - mine option to faster a game
- Different levels of difficulty
- Variety of playing rooms
- Additional options for rules (Gold bet, 4 Aces and other)
- Enhanced statistics to follow progress
- Share your achievements with friends

Short rules:
A 24-card deck is used. 1000 is a point-trick game: the aim is to win tricks containing valuable cards. There are just six cards in each of the suits Hearts, Diamonds, Clubs and Spades and their ranking from high to low and their point values are as follows:

There are therefore 120 card points in the pack altogether, and a player who holds both the king and the queen of a suit (a pair or marriage) can obtain additional points by declaring them as follows: