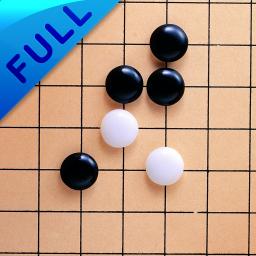 *****App Store***** one of the most popular Gomoku, ranks highest in the similar and ranks first in China (and stable among TOP 3). It has also ranked game total list TOP 200 (stable among TOP 300).

Gomoku is originated from China(五子棋) and popular in Japan(五目並べ), korea(오목) and all over the world. It is also know as Gomoku, Renju, Gobang or Five in a row.

The rule is simple. Black plays first, and players alternate in placing a stone of their color on an empty intersection. The winner is the first player to get an unbroken row of five stones horizontally, vertically, or diagonally.

*****Attention*****
-Due to the screen limitation of iPhone, this game adopts new method as "touch-move-release": While touching the screen, red tip box will be shown on chessboard. Keep touching and moving tip box to expected postion. Release the finger.
-iPad version can be used with the new method "touch-move-release" as well as the traditional method "Place to be clicked".

Game Features
-Support Game Center, the global leaderboards and the rich achievements making your game full of fun and challenges
-Online game, enables multiplayer between you and your friends or anybody around the world
-Single-player challenge computer AI, able to choose different levels of AI to challenge.
-Standard 15x15 board
-Accurately touching, moving and releasing the chess.
-Clean and neat graphics
-Nice background music